I see the situation of mAsset on premium is becoming serious. Multiple mAsset have over 10% premium and has no sign of topping. This will seriously affect the incentives for users to use the protocol as the price change cannot be predicted and mAsset will have no advantage over traditional stock exchange. 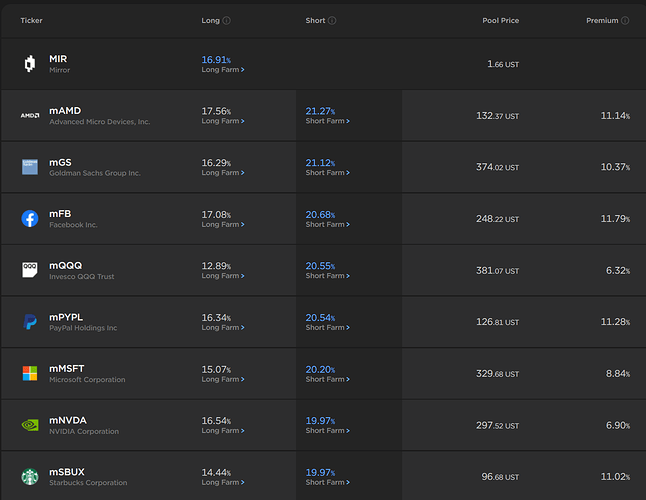 I also see the current mechanism of maintaining mAsset peg to real asset, which is to distribute MIR token as reward (and inflation). But there is a flaw in allocation of MIR reward between mAsset - each mAsset basically have equal weighting on MIR distribution.

For example, if the total inflation is 100MIR per hour, each asset will receive around (100/count of mAsset)MIR per hour. However, we know there are different liquidity size on each mAsset. For example, mAMD has 2M USD liquidity and mBABA has 6.5M USD liquidity. Both are at ~10% premium but the reward rate is largely different (mAMD:21%;mBABA:13%).

This unequal distribution is due to reward not adjusting based on liquidity size but is fixed on each mAsset. When a pool has larger liquidity, more people share same pool of reward, making the incentive to peg weaker than other mAsset. What I will propose here is to make change to current mechanism and make the MIR reward distribution based on liquidity size. For example, if we only have two mAsset mAMD (10M liquidity)and mBABA (25M liquidity), we will allocate (10/35)% reward to mAMD and (25/35)% reward to mBABA. This will make the reward more reasonable and has larger effect on keeping the premium/discount low.

Another thing I would propose here is to make LP and sLP reward equal. For now the reward is biased to LP. According to the Mirror doc, reward of sLP is at max 40% of total reward of single mAsset if the premium reaches ~6.25%. 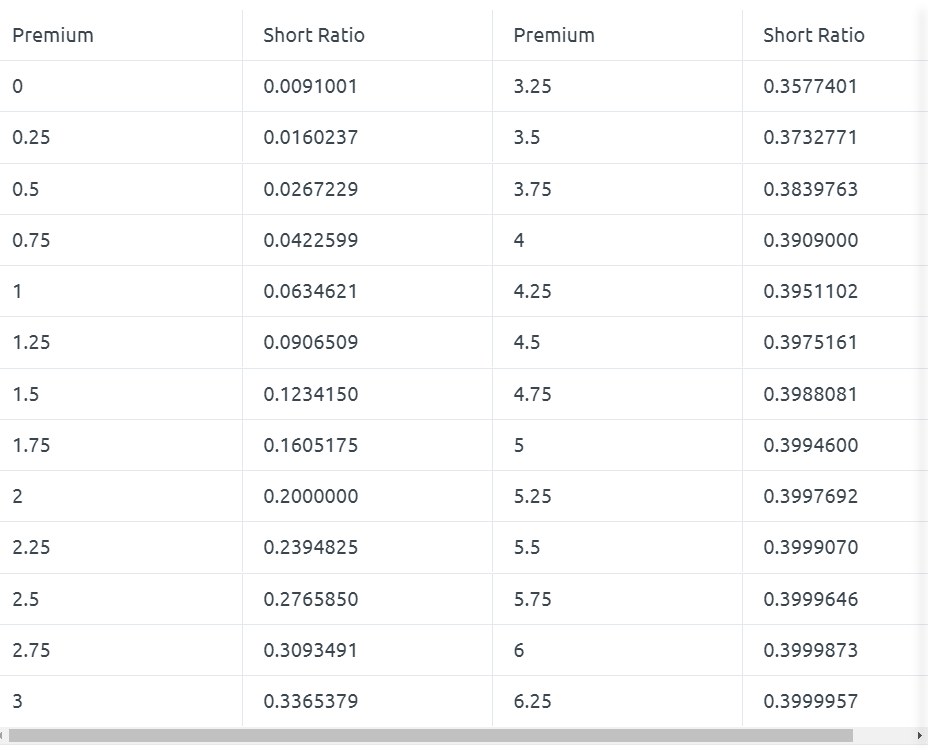 I do not see why should the reward be biased to LP. This practice is causing users to buy mAsset and stake as LP, while pushing the premium higher. The primary goal in Mirror protocol should be to remain the peg 1:1 between mAsset and Asset so that people could reliably use Mirror Protocol as a proxy to invest in stocks, with additional advantages such as permissionless and so on. If we put liquidity size over peg, this protocol will eventually die as it became meaningless to buy so-called ‘mirrored’ asset while not actually mirroring real whole stock price.

Looking forward for any input on my ideas. Thanks.

I agree it doesn seem like an issue. I think to change any of that stuff you have to create a new Mir token though. To me, it seems it would be better to adjust rewards on the lp pool similar to slp. Why is the price high? Because somebody is paying premium. Why are they paying premium? Because they can earn 10+% in the lp pool.

In addition the collertal ratio appears to have larger effect on premiums than rewards. Which is related to anchor rewards. Instability with anchor will likely result in instability in Mir.

The primary goal in Mirror protocol should be to remain the peg 1:1 between mAsset and Asset so that people could reliably use Mirror Protocol as a proxy to invest in stocks, with additional advantages such as permissionless and so on

Hi guenis, thanks for your input. Could you elaborate more why premium tend to be the same when they have similar collateral ratio setting?

However, if we look back in Mirror Protocol, our reward system do not reflect proportionally on how large the spot-mAsset spread is. We have fixed amount of emission as reward for sLP and LP holder. The emission (no matter how we allocate them) cannot keep up with the growth in protocol (in terms of premium magnitude and pool size). If we are aiming for scaling this protocol large in long term, we will have to redesign the incentive system. We will need arbitrageurs to work for us to maintain the stability of the protocol in terms of asset-mAsset spread.

And we need the peg to get the trade volume which will drive fees which will drive sustainability. I think we are now getting to a point where we have to solve this issue. I myself wanted to trade more in the coming month, but since I played around with some massets, tried shorting, longing, lp, … I came to the conclusion mirror is unusable in its current state. I had the case that the oracle went down but pool price went up. Why would I put any trade in a system that is that detached from the underlying?

It is clear that premiums are getting out of control, which defeats the long term use case of providing permissionless global access to assets which have traditionally been inaccessible to many.

Farming emission rates should absolutely be designed to heavily incentivize short farming when a premium exists and heavily incentivize long farming when a discount exists. The fact that an mAsset with a 10% premium can still have a significantly higher long farm incentive than a short farm incentive is counterproductive if the goal is to maintain a soft peg range with the underlying assets.

LP price should be pegged to oracle price, just like with stable coins, but demand for mAssets is not a lot, smaller than that of stable coins, and you can see on smaller stable coins premium is close to that one of mAssets, this is mostly due to oracle price of mAssets not being related to the price of LP, it’s very soft pegged, one of the ways of solving this would be to lower collateral ratio on all mAssets to 110 or 120%, this would give people riskier loans that would be liquidated more in order to maintain price.

Way of solving this is switching from normal LP pairs, where price is calculated by ratio of coins in LP pair, to curve LP where ratio of tokens is controled to maintain price and peg

We now crossed the 21% premium. The way long farming is subsidised mirror is losing all the little volume it had to begin with. It’s digging its’ own grave now. RIP

If the reward mechanism could be more reasonable, more arbitrageurs will be able to do Short mAsset Long stock (in brokerage) strategy to drag down the premium. However, with unreasonable reward design right now, no incentive for arbitrageurs to operate this strategy. The uptrend in price premium has force many arbitrageurs to stop lose and get out of the market, pushing the premium higher (we all know how short squeeze works).

Would there be developers who could comment on the feasibility of our proposals? Thanks

Last night I’ve digged myself into the whitepaper and the protocol system rebalancing process, see my post attached below. I’ve covered an exact solution for the problem which isn’t just a fast bandaid, rather a long term resolution.

One easy way to reduce the premium and encourage minting of the mAssets without changing the code is to reduce MCR to a more reasonable value. We all see how mSPY & mKO (110% MCR) have been behaving so far.

We can start with lowering the MCR for mQQQ to 130% and see how soon its premium will quickly reach near 0.

Exactly. The idiot thinking that bringing SOLELY mKO and mSPY back up to 130% is going to have any affect on its premium is laughable. We should reduce all mAssets to 130% and take of the training wheels. Spread out the current load on those to tickers to the rest of the ecosystem. Also if you worry about liquidations… this is DeFi, if your dumb enough to fly to close to the sun you deserve to get burned.

The high number of delta neutral strategies and in relate, the high liquidity sure affects the LP price in mSPY and mKO, but we couldn’t know for sure what would happen if all of the mAssets collateral ratio would be the same. MSPY and mKO LP prices benefit from the current liquidity environment, but if this liquidity would distribute evenly throughout all of the assets, the advantage would be gone. Maybe if significant amount of new money would enter the protocol, the change would be predictably significant, else it’s not solve the problem for the long run.

PS. I’d also like if the coll. ratio would be lower, but that’s another topic.

the long-exsiting high premiums have reached over 20% for multiple mAssets. It’s already 5 standard deviation away from history mean. The arb mech seems not working at all, need something to be done to bring it back…

It’s already discussed in the below article check it, in a few days hopefully a proposal will be done also.

By increasing the reward allocation to 100% for the shorts only means that the very high premiums would get close to the oracle price faster → in case of low premiums the 100% allocation would rebalance meaningfully to the long side, so if we lower the high premiums faster, we’d also get the long APR faster.