We are proposing to establish a Mirror Steering Committee made up of community members: Something Else, Y-Foundry DAO (represented by Dr. Cle4n), Joseph Savage, Hank 0, 0xCoolGuy, Sigma male, Rebel_DeFi and other community advisors. This will take the leadership direction out of the hands of TFL and into the community further strengthening the decentralized leadership of the protocol.

The main objective of the Mirror Steering Committee will be to research, present and implement ways to drive growth to Mirror Protocol and its community members. We initially propose that, if this proposal to fund the establishment of a Mirror Steering Committee is passed, (1) the Mirror liquidation process must be reworked and (2) required collateral ratios for minting/borrowing mAssets should be subsequently reviewed and reduced where appropriate. This will greatly increase the capital efficiency of mAssets and enable various types of leverage strategies. The Mirror steering council will also focus on how to better capture value for MIR from these strategies.

The Current State of Mirror

Despite still being a heavy-hitter of a protocol, the golden days when Mirror enjoyed prime status by being one of the first dApps on Terra are now in the past. TVL has declined over time, showing that there is need for further improvements to stay in line with current user expectations and needs. 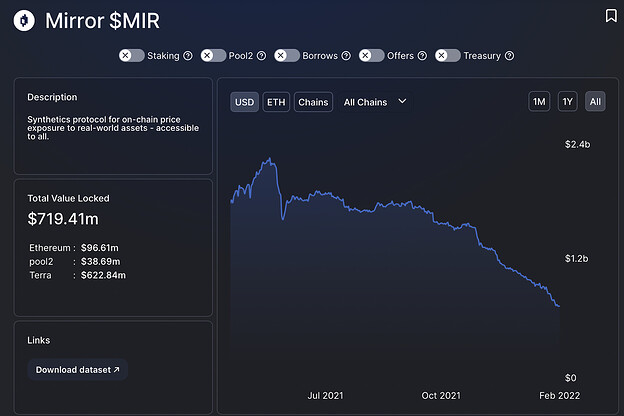 Along with the arrival of many new protocols/dApps during the TeFi Autumn of 2021, it is now more critical than ever to update and improve Mirror Protocol’s capital efficiency and mAsset capabilities in order to stay competitive in the fast-moving DeFi world.

With that in mind, it is proposed that the Mirror Steering Committee be officially established to serve as a conduit of this upgrade process. Featuring some of the best known names in the Mirror community and a representative from YFD—a decentralized vault factory that is building on Terra.

This committee is explicitly formed for the purpose of researching proposals and establishing grants to fund further upgrades to Mirror Protocol, all of which will go through confirmation via the governance mechanism of staked MIR holders.

This reinforces the statement that Mirror Protocol is not controlled by any one person or hierarchy, but by a decentralized governance body where each user has the chance to vote.

The Mirror Steering Committee will act as an independent body that performs research and establishes grants to fund various development efforts on the protocol. This would require community funds to be deployed—to pay for developers for example.

A detailed cost breakdown will be provided for each spend action from the multisig—to ensure full transparency and accountability. The community will have full visibility to the wallet address (mentioned near the end of this post) and hence be able to verify the actions of the multisig.

Furthermore, the payment schedule and QA process for developers will be introduced after further discussion. This is to ensure that the work of developers passes reasonable audit requirements and meets Mirror Protocol standards before full payment is disbursed.

With the above in mind, this proposal will establish and fund the Mirror Steering Committee multisig wallet with 400,000 MIR tokens (0.72%) out of the estimated 55M tokens currently residing in the community pool. This to begin funding immediate research and development for the current range of protocol improvements needed (details below).

The Mirror steering committee’s first course of action will be to increase incoming protocol usage and revenue via these proposed upgrades to the protocol:

Mirror’s core function is to allow users to create a supply of synthetic assets that mimic the price behavior of real-world assets and give traders anywhere in the world open access to price exposure.

The main and only driver of revenue to Mirror is the closing of mAsset CDPs, which incurs a 1.5% fee. This means that, in order to generate more revenue and accrue more value to MIR stakers, changes should be made to incentivize more frequent minting/closing of mAsset CDPs.

While mAsset trading volume doesn’t generate any revenue for Mirror, it can incentivize deeper liquidity as volumes and APRs increase, thus decreasing slippage during trades. However, current mAsset LPs generate, on average, single digit APRs (excluding MIR rewards, which will reduce significantly and run out altogether in ~2-3 years). By increasing trading volume to mAsset pools, liquidity providers would be further incentivized to add more liquidity.

Additionally, another salient issue is the persistent premium of mAsset pool prices over oracle market prices. As of now, nearly all mAssets are trading at a base premium of 1-9%. Users who want price exposure to Robinhood stock for example would see that the price on Mirror is nearly 8% higher than the market price. This would discourage them from buying it on Mirror as they would have a higher entry cost. 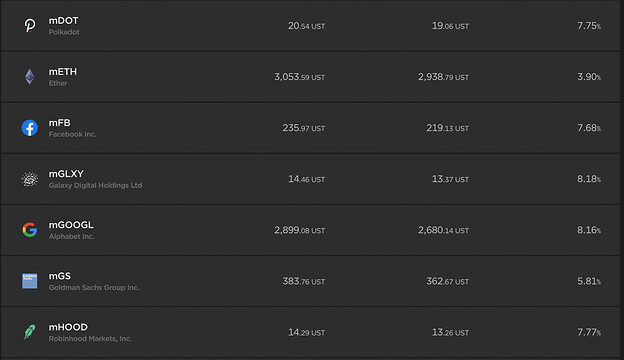 Ordinarily, arbitrageurs can balance that premium by simply minting more mAssets through Mirror CDPs—therefore profiting from the difference. But there currently still exists a large premium between assets which means that there is not enough arbitraging activity going on.

One of the obstacles faced by arbitrageurs is the risk of liquidation — their position can be put at risk whenever the shorted asset moves upwards in price. With the current Mirror liquidation mechanism which operates on a first-come-first-serve basis, with a flat 20% discount for the liquidator (and penalty for the borrower).

This is arguably inefficient, the market could likely find bidders who would bid lower premiums to liquidate assets (especially since mAssets, aUST, LUNA and LunaX will be potentially biddable collaterals in Mirror CDPs).

Due to this liquidation mechanism, high collateral ratios are a necessity to keep CDPs solvent. In order to encourage further borrowing with more capital efficiency and attract more liquidators, the current liquidation mechanism would have to be reworked, to resemble that of Anchor’s and to also be similarly democratized via user-friendly frontends.

In addition to this, we are also encouraging protocols like YFD, Nexus, Spectrum, and more to integrate Mirror CDPs and increase the usage of mAssets throughout the Terra ecosystem.

Y-Foundry DAO (YFD) is a new protocol that uses Mirror CDP’s as a building block for users to enter vaults such as Hedge+ or Shielded Shorts. These initial vaults almost exclusively use Mirror CDPs and mAssets, which then generate fees for Mirror Protocol and mAsset liquidity providers. Furthermore, these positions can be opened and closed multiple times throughout the day by users or the protocol, thereby generating recurring revenue for Mirror Protocol.

Nexus Protocol has also announced plans to integrate Mirror CDP’s into a “Mirror Short Leveraged aUST Farm” product with a fixed deposit timelock of 3 months that is currently under development. This will replace their original Mirror Delta Neutral strategy vault.

An invitation to all ecosystem partners

We openly encourage as many ecosystem partners to send representatives and provide their technical expertise and guidance, to help make Mirror into the protocol that Terra users deserve.

Next up, Reworking the Mirror governance mechanism is at the top of our list.

Vote YES to establish the Mirror Steering Committee and fund the committee’s multi sig wallet with 400,000 MIR (0.72% of community pool) tokens for immediate R&D of the ideas outlined above in the above sections.

The steering committee currently consists of Something Else, Dr.Cle4n, Joseph Savage, Hank 0, 0xCoolGuy, Sigma male, Rebel_DeFi and other community advisors. A 5 person multisig wallet has been created with members of the committee which will require a 60% majority for any proposal to pass.

The immediate action of the committee will be to work on improving mAssets capital efficiency, and reworking Mirror liquidation mechanisms.

Thank you for getting the proposal up. This is a milestone with a lot of work behind it from everybody in the committee!

Great work on getting this going. My suggestion is to raise the request by 50% to 600k MIR. LFG

Looks good to me.

One thing I would prioritise for capital efficiency is moving to a different liquidity pool type. xy=k does not make sense for an asset that shouldn’t really have much slippage, as the price is supposed to be tracking an oracle. Not sure of the optimal way to do this, whether uniswap v3 style as mentioned in [Call To Action]Mirror Steering Committee, Mirror V3 Roadmap - #13 by visionary.ust, or some kind of stableswap pool that has a mechanism to allow the price to change.

I think mirror needs to

I’ll have some supporting material for ya guys. Give me one day.

Great community initiative. One slight criticism I have is that I think you should have attached links to everyone’s Twitter while providing a bit of a bio/history of the members and why their interests in mirror? - perhaps include any applicable background which makes them ideal candidates for the decisions ahead.

The current short rewards mechanism doesn’t appear to be all that effective and has led to the yield vampires sucking the value out of MIR, creating a nasty loop of lower farming rewards and liquidity.

I look forward to reading more of your thoughts.

My third article on arbitrage mechanism is more of an out there lad that could work and be super unique, but isn’t the end all be all solution. I’ll work on that one more this weekend–thank you for the kind words.

Great articles badger, i can see plenty of overlap between what you’ve written and what we want to do.

Definitely sounds like @EuphoricBadger should be considered for a member of the MSC!

Great proposal! You got my support!

After some previous personality driven attempts to reform Mirror, we wanted to keep the focus on the ideas and not the people.

I started experimenting with various defi protocols and applications in 2020. After trying both synthetix and uma protocols, I migrated to Mirror Protocol because Terra’s lower transaction fees make it much more relevant to smaller investors. I was brought into Terra ecosystem by Mirror protocol, and have since experimented with a few other protocols on Terra.

I also started a free newsletter (which I did not continue with because every time I try to write consistently I find that I really hate writing consistently) about defi topics, where I have written about both Mirror and Anchor.

I have been active in the Mirror discord for about a year and have tried to be a helpful voice of reason throughout all of my activity.

For clarity, the Mirror Steering Committee is made up of more members than are trustees of the multi-sig wallet.

Mirror was my introduction to the Terra ecosystem where I began farming mSLV - UST LP in early 2021. It has made me realise just how fast things move in defi, and that strategies don’t last forever.

I began a YouTube channel to show real world friends how I am using the Terra ecosystem and since then have moved pretty much all in, to Terra.

As part of the Mirror Steering Committee and being doxxed, my role is to demonstrate that this group is legit.

Do you need a gardener, ser

As a member of Nachos pvt investment group, personally would be really happy having Nacho involved.

I have worked with nachodon for the better part of a year, and have benefited greatly by his leadership and experience in the crypto space. He is a true champion for Terra/Luna and especially the Mirror protocol. I would love to have him be more involved in the steering of Mirror. There is no doubt that we would benefit by his passion and understanding about what needs to change!

yes of course. but have 2 already.