Our team at Refraction Labs is looking to address the issue of smart contract failures and the negative depegging of synthetic assets from their real-world values. We plan to facilitate measures by which users of Mirror Protocol can hedge their risk against these events. We believe Glass Finance is the solution to these problems.

What is Glass Finance?

Glass Finance is a decentralized insurance protocol powered by smart contracts on the Terra network. The protocol facilitates levered coverage of mAssets against technical and economic failures, such as smart contract failures or negative deviations of mAssets from their real-world values. The removal of such risks from synthetic assets allows for large-scale adoption and increased capital investment in these financial instruments. The increment of safety and investment, and the number of yield strategies available for mAssets, creates competitive advantages for investing in mAssets over real-world assets or other on-chain synthetic assets. There are various coverage vaults for each respective mAsset, with governance determining the target leverage ratio for each vault (UST coverage provided: Amount insured), depending on the risk of failure for each type of mAsset.

Why is Glass Finance important to Mirror?

Glass Finance acts as a protective layer for Mirror Protocol. Through our protocol, Mirror will be brought back to the forefront of Terra, as mAssets become far safer to invest in, thus increasing public interest and market share. We anticipate that this will end months of economic stagnation for Mirror while the rest of the Terra ecosystem prospered. We aim to incentivise the decentralized insurance of mAssets in Terra in the short term, although our long-term vision involves moving Glass Finance cross-chain to a multitude of synthetic assets.

Glass Finance is anchored by its community. It is built from the ground up as a Decentralized Autonomous Organization, meaning governance is a key feature of every aspect of the protocol. The protocol will continuously evolve to reflect new concepts and ideas (new assets to insure, more blockchains to insure etc…).

How does Glass Finance work?

There are three roles that can be found within Glass Finance: the Insurer, the Insuree, and Oracle Feeders.

The insurer provides levered coverage for vaults of their choosing. In return, they receive the insurance premiums from the mAssets covered by the vault. The insurer’s deposits are placed in Anchor Earn to maximise their yield. Depositors receive a newly minted gUST, in exchange for their deposit. gUST tokens represent a depositor’s share in the stablecoin pool and can be redeemed to claim the initial stablecoin deposit, along with accrued revenues from insurance premiums and Anchor depositor interest. To ensure the reliance of insurance payouts, insurers’ deposits take three weeks to unlock, similar to LUNA staking.

To ensure the capital efficiency of our protocol, governance can determine the target leverage ratio of each vault (UST coverage provided/Amount insured). When a vault is over-leveraged, the emissions of $SHARD tokens to insurers increases, while the emissions to insurees decrease, and vice versa when a vault is underleveraged. This incentivizes an equilibrium decided by market sentiment on the target leverage ratio. Insurance premiums also dynamically shift to incentivize the maintenance of the leverage ratio.

For example, if there is a leverage ratio of 1:3 on the mAPPL vault, 10 million UST is needed to insure 30 million of mAPPL. To ensure that leverage ratios are maintained, the protocol’s fees are either raised or lowered until the optimal ratio is reached. Insurees are required to pay an upfront premium to deposit their mAsset for coverage and can buy three, six or twelve months’ worth of insurance.

The insuree deposits their mAsset in a coverage vault for a period of three, six or twelve months. They pay an initial premium for coverage, which is a variable rate of insurance that can also be governed by $SHARD holders. When the Insuree’s coverage period ends, they have the option to either pay the premium again to renew their coverage, or to withdraw their mAsset from the coverage vault.

In order to determine how much the mAsset has fallen relative to its real-world value, Glass Finance utilizes an Oracle Feeder. Due to the critical role that this plays in the protocol’s functionality, the Oracle Feeder is elected by governance.

Insurance claims are triggered when the insuree claims their mAsset deposit from the vault, and its value has fallen lower relative to the asset that it has been mirroring since the time of deposit. The funds are then paid out from the insurance pool to the insurees.

Much like Mirror protocol, Glass Finance will be governed in a decentralized manner by stakers of the protocol’s governance token, $SHARD. There is a maximum supply of 1,500,000,000 (1.5 Billion) $SHARD tokens, although the circulating supply is far less. This is demonstrated by our token emissions model (see below), which covers the first five years of Glass Finance. Since our protocol is reliant on Mirror Protocol’s infrastructure and users, much of the $SHARD token supply (40%) will be airdropped to MIR stakers, with 10% to LUNA stakers, both over a period of five years.

We believe that members of the Terra community will drive Glass Finance for years to come. We also acknowledge the risk of team abuse - we have ensured $SHARD is protected from this by only releasing our team’s 10% allocation of tokens three years after the release, in yearly increments. Further, the longevity of Glass Finance is supported by aggressive LP and Protocol Incentives over the first five years of the Protocol, ensuring long-term participants are rewarded for their commitment to the project. 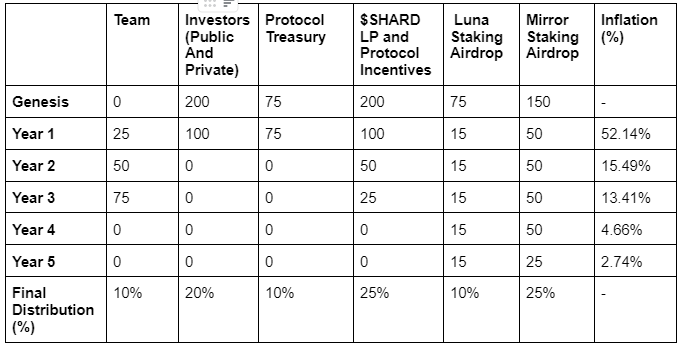 Another innovation we are utilizing is our staking mechanism - $SHARD staking - which captures a portion of the revenue generated by the protocol, allowing the value of the token to grow in a linear fashion with the protocol’s TVL. Staking rewards are powered by a 10% levy on insurance premiums. These rewards are distributed to stakers pro-rata to their stake, with stakers able to receive their rewards in auto-compounded staked $SHARD, or in UST. The option to receive staking rewards in UST solves an economic problem faced by other protocols native to Terra, where the staking rewards are reliant on the token’s price action, rather than the protocol’s revenues.

We aim to raise 99,500 MIR ($169,150.00 @ $1.70 MIR). The lion’s share of this funding will go towards boot-strapping the deposit side of the first series of mAsset vaults, to ensure that sufficient coverage is initially provided for mAsset depositors. The remaining funds will go towards hiring more developers and also graphic designers to improve the UI/UX, server hosting for the website, and the auditing of our code by a trusted third party. 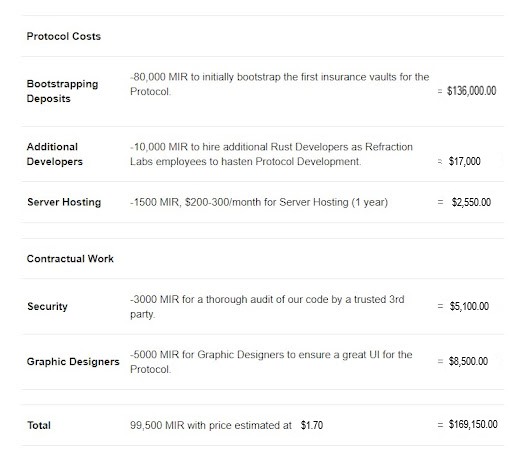 I would vote no if put to proposal.