Why was mPYPL so much higher than market?

Notice belief price of 215 on January 28 at Terra Finder when stock price was around $160.

This caused me to be liquidated.

The belief price you are looking at is on the liquidation bot’s purchase of the mPYPL shares from the LP that it later used to complete the liquidation. The bot likely has that set intentionally high to ensure the trade on the LP happens.

The belief price is not the oracle price.

Thanks. Is there somewhere to view a history of the oracle price?

The fact that you bought is not relevant to your short being liquidated.

I would do some more research to understand the shorting mechanics as It sounds like you may not fully appreciate how it works.

Yes I know that owning mPYPL does not serve as a replacement for collateral. But not sure how that relates to the price oracle question?

How was your Collateral Ratio before the liquidation?

I opened the CDP with aUST and a collateral ratio of 200% and had not adjusted the ratio in the next three days until the liquidation happened.

There isn’t really an easy way to get the oracle prices, but I looked at your transaction closer and I think you got screwed by a bad print on the oracle.

There were several other mPYPL positions that were liquidated right around the same time as yours. Example 1: Terrascope
Example 2: Terrascope

I stepped back through the blocks looking at the oracle updates and I believe the update that caused you to get liquidated was this one in block 6260144 which had PYPL at 207.7687: Terrascope

I don’t know where there are charts that show after hours, but it looks like PYPL closed ~$163 and opened the next session ~$167, so $207 is definitely an outlier. 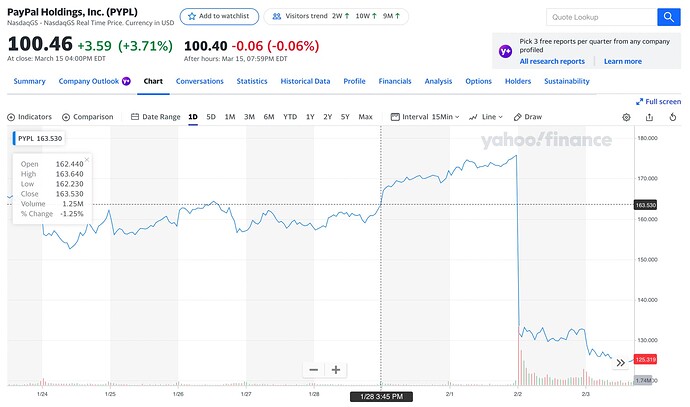